Eco-Friendly Gifts: How We Are Very Careful In Using The Term 'Biodegradable'

If you're confused about the term 'biodegradable', don't worry!

We are here to cut through the noise, and give straight forward, honest answers. In this blog, we will be asking a few questions we think are important to helping to understand what biodegradable really means, and to avoid being mislead by unclear advertising.

We will also go over a few areas including bioplastics, microplastics and landfill conditions, to give an in depth understanding of what biodegradable means and doesn't mean.

What Is The Definition Of 'Biodegradable'?

The definition of 'biodegradable' is as follows:

A material is biodegradable if it can break down into biomass, CO2 and water, with the aid of microorganisms.

An obvious example of a biodegradable item is an apple. If it is placed in a field where the correct microorganisms are present, it will decompose into biomass CO2 and water. For an apple, this is typically within a month.

The most (in)famous example of a biodegradable product is probably the 'biodegradable' dog poop bag. We won't name brands as there are many of them, and it would be unfair to pick on a singular company.

These bioplastic bags can biodegrade, but the correct conditions have to be present. There is also no time limit placed on something to biodegrade, for it to be classed as biodegradable.

If you buy a 'biodegradable' dog poop bag, you assume that when you put it in the trash when you're done with it, the bag will most likely go to landfill. When it goes to landfill, you assume that this bag will biodegrade over time in a landfill site. Unfortunately, this is not completely true.

This is because the required microorganisms are not always available in landfill conditions, due to oxygen deprivation and the density of waste in the landfill. If there are no microorganisms to aid with the biodegradation, then it is unlikely for the biodegradable material to break down.

If we take the specific case of PLA, it will most likely just remain inert in an anaerobic landfill. This means it won't break down, and will just occupy space.

"Staff of the Federal Trade Commission has sent letters warning 20 manufacturers and marketers of dog waste bags that their “biodegradable,” “compostable,” and other environmental claims may be deceptive."

The FTC pursued the cause, for the reason that most biodegradable dog poop bags are put in the bin, where it is likely for the bags to biodegrade extremely slowly, or not at all.

We think this is fair. If we bought something that is called 'biodegradable', you would expect it to break down wherever it ends up, which is usually landfill. This leads us onto our next question.

What Is The Point Of 'Biodegradable' Products If They Do Not Biodegrade In Landfill?

To answer this question, let's clarify a few things.

Bioplastics are plastics that are produced from renewable resources, have the ability to biodegrade, or both. The graph below shows the four different segments of plastics based on their raw materials and their biodegradability. 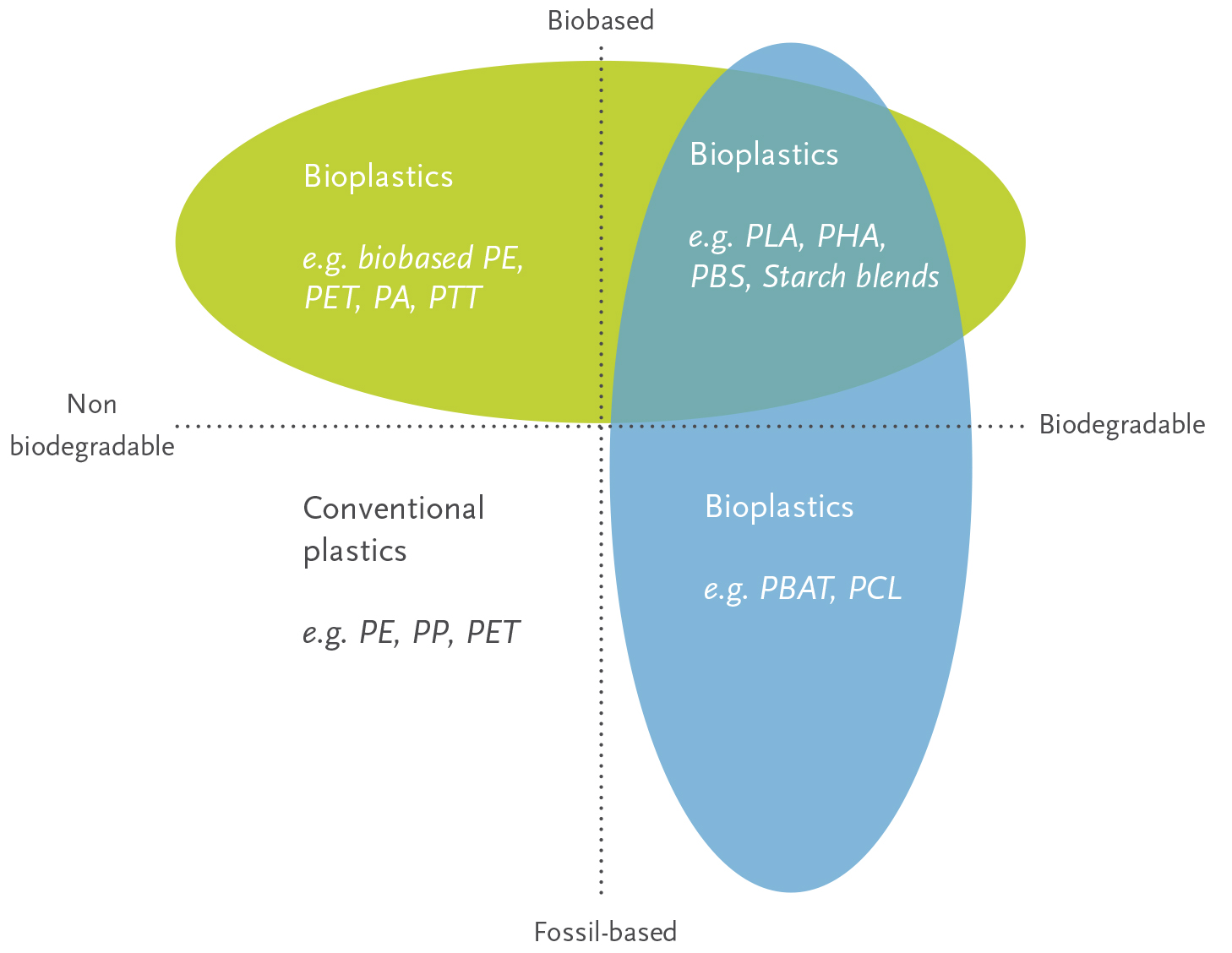 The first group is composed of non biodegradable biobased plastics.

These are plastics that are made from biological matter (not from petroleum), but can't biodegrade. Plastics from this group include biobased PET and biobased PE.

A leading manufacturer of biobased PE is Braskem, a company based in Brazil. They produce their biobased PE, by using ethanol from sugarcane. In terms of characteristics, their renewably based PE is the same as fossil based PE.

A key factor of their Green PE is that it can be recycled using the same processes as conventional PE. Because their PE cannot biodegrade, the carbon captured by the sugarcane cultivation, in order to form the bioplastic, remain sequestered during the entire lifecycle.

As a result of this carbon capture, the cradle to grave carbon footprint is actually negative, meaning it contributes positively to the carbon concentrations in the atmosphere.

Non-biodegradable fossil fuel based plastics are the next segment. This group of plastics are what you think of as traditional plastics. They are the most commonly used plastics currently on a global scale.

They are produced from crude oil, and once done with, they will not biodegrade. As a result of their production processes and raw materials, plastics such as PET and PE have far higher carbon footprints than their counterparts produced from renewable biomass.

Fossil fuel based biodegradable bioplastics include PBAT and PCL. These bioplastics have been produced from fossil fuels, but have the capacity to be broken down by microbes found naturally into CO2, water and biomass.

Biobased biodegradable bioplastics are the final segment. This group of plastics include PLA, a material that is used to make many of the compostable items in our Eco-Friendly Picnic Set.

They are produced from biomass, and can biodegrade when the required microorganisms are present.

We will get onto composting a bit later in the blog, but PLA is fully compostable as well as biodegradable.

So going back to the question of 'what's the point of biodegradable materials if they don't biodegrade in landfill', we will talk specifically about the problems caused by the production of non biodegradable fossil fuel based plastics.

Side by side, we will explain the equivalent process behind biobased bioplastics.

An important thing to express from the graph is just because a material is produced from biomass, does not mean it is biodegradable. This is shown from bioplastics such as biobased PET.

On the other hand, just because a bioplastic is produced from fossil fuels, does not mean it can't biodegrade. This is shown from fossil based bioplastics such as PCL.

The Production Of Fossil Based Plastics

Conventional plastic is a huge contributor to climate change. Most plastic resins are produced from petroleum, or crude oil. To get to petroleum, intensive processes such as extraction and distillation are required.

The processed petroleum then needs be to made into plastic products such as water bottles, carrier bags and food packaging. Whether it be through the energy required to fulfill these processes, or directly, these steps result in huge amounts of Carbon Dioxide being released.

In 2015, the emissions released by fossil based plastic production and transport were equivalent to roughly 1.8 billion metric tonnes of CO2.


The Production Of Bio Based Bioplastics

Because bioplastics such as PLA are produced from renewable biomass resources, the carbon footprint is far lower than fossil based plastics.

This is because the plants used to produce PLA actively take in CO2 from the atmosphere. They then store this carbon, and don't give it out until they reach specific end of life processes such as biodegradation.

This results in a 75% reduction in carbon footprint relative to conventional fossil based plastics.

As PLA production processes increase in efficiency, the GWP (global warming potential) is predicted to drop below 0. This means that the production of PLA will actually help to reduce the rate of climate change, as opposed to adding to the crisis.

So even if biobased biodegradable products end up in landfill, the first part of the LCA (Life Cycle Assessment) is a great deal less damaging and harmful to the environment than the production of petroleum based plastics.

Microplastics are pieces of plastic less than 5mm in size.

Microplastics are a huge problem. Microplastics travel up the food chain from the bottom of the oceanic environment, such as Zooplankton. These small creatures are then eaten by marine species on the next step up of the food chain.

Through a process called the 'trophic transfer of microplastics', the plastic that was in the body of the Zooplankton when it was eaten, is now transferred to the predator that digested it.

This process continues all the way up the food chain, and as a result, plastic has been found in a vast amount of marine creatures that have washed up on Britain's shores.

Microplastic traces have also been found in humans. The plastic that is being thrown away is quite literally making its way back up the food chain, all the way up to us.

Microplastics can enter our water systems in a few ways, the main two being surface runoff and wastewater effluent. In terms of surface runoff, paint from roadmarkings is actively eroded by cars driving across them.

Clothing also proves a large contributor to microplastic pollution. Washing clothes using washing machines releases microplastics with every wash. This is due to most clothing being predominantly made of plastic fibres such as nylon and polyester.

What Does Compostable Mean?

As well as being biodegradable, some bioplastics are compostable. This is where things get exciting.

Onto our final question. Compostable bioplastics can be broken down completely into usable compost. There are two types of compostable methods - Industrial composting, and Home composting.

Home composting is what you think of as the compost heap in your back garden. Industrial composting needs proper industrial equipment.

EU13432 is the compostable Industrial standard, and for a product to be EU13432 compliant, it must pass certain tests. The main points for EU13432 are:

The main points for home composting, or the Vinçotte Certification Programme, are as follows:

So what does all that mean in plain English?

As mentioned earlier, to get one of the main benefits of compostable bioplastic, you need to have a way of disposing compostable materials correctly. This is why we have created LFHP Zero.

We have teamed up with a compostable waste processing partner, so all your used compostable items can be composted completely.

LFHP Zero can be applied to any of our gifts with compostable items in them, such as our Eco-Friendly Picnic Hamper.

This ensures all of your compostable waste will be processed properly under the required conditions, and we guarantee zero waste will go to landfill.

We think it is the best way forward for a sustainable, plastic free future, one that is easy and accessible to everyone, and an idea that treats our environment with the respect it deserves.

With this blog, we've talked about what the term 'biodegradable' really means. We've also looked at how the term can be misleading, and how biodegradable materials are unlikely to biodegrade in landfill.

Our range of gifts for eco warriors stands out from the competition, by using creative and unique ways to replace single use plastic in the gifts themselves, and the packaging they come in.

Gifts for eco warriors are often packaged in single use plastic, which then goes straight into landfill after the recipient has received the gift. Our gifts use packaging built from renewable resources, which have the most minimal impact on the environment.

If you would like to read more about the world of biodegradability and everything it encompasses, feel free to subscribe to our email list at the bottom of the page.